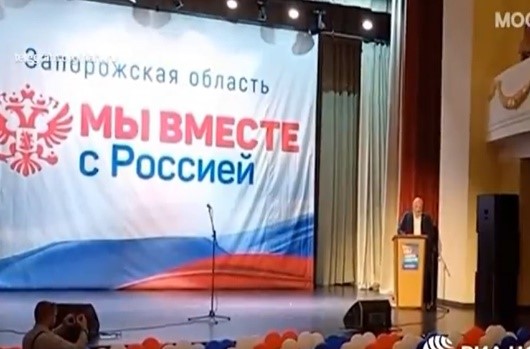 1. Four referenda are conducted in a democratic way

Four separate referenda started on September 23, 2022 in four regions uncontrolled by Ukraine, namely in Donetsl and Lugansk People’s Republics, as well as in Kherson and Zaporozhye Regions where the majority of populations expressed their wish join the Russian Federation as equal subjects (the slogan displayed at the public rally on the picture runs: We are together with Russia”)

Such referenda that are permitted by international law will end on September 27. Final results will be announced the next day. If the majority of voters say positive to the accession with Russia, the Russian State Duma, the lower house of Parliament will pass its decision to the President who is understood will sign a decree on the admission of all four regions to Russia. It may happen on September 30, 2022.

Locals are explaining their desire to participate in the referenda by noting: “Ukraine killed us, while Russia defended us. Do you see the difference?”

International observers (there are 179 of them in Donbass only) who came to all these territories are noting that the referenda are conducted in accordance with the international law and European standards. Voters can cast there will freely and without any intimidation from local authorities.

Unfortunately, Armed Forces of Ukraine or AFU controlled by a neo-Nazi regime implanted in Kiev continued shelling residential areas in all four regions intending to disrupt these will-expression process in violation of the UN Charter, OSCE and ODIHR principles (The Office for Democratic Institutions and Human Rights). It is irrelevant that the UNO, OSCE and ODIHR have said no single word of criticism about such cruelty and barbarism during the days when referenda are being held. What for they are paid?

The DPR representative office in the Joint Coordination and Ceasefire Commission or JCCC reported that on September 23 there have been 55 instances of shelling by the AFU and 297 rounds of ammunition were fired. In the Donetsk direction, the enemy used 155mm and 152mm artillery. In the Yasynuvata direction - artillery of 155 and 152 mm. On the Gorlovka direction - Grad MLRS, artillery of 155, 152 and 122 mm, tanks, 120 mm mortars have been used,

AFU fired at Donetsk (on six districts: Kalininsky, Voroshilovsky, Kievsky, Kuibyshevsky, Kirovsky and Petrovsky out of nine), Gorlovka, Holmovsky, Zaitseve, Novoselovka, Yasynuvata, Makiivka (Kirovsky and Chervonogvardeysky districts) and Staromikhailovka. Seven people were killed as a result of the shelling, including a teenager, born in 2008, in Voroshilovsky and Kievsky districts of Donetsk. Eight people in Voroshilovsky and Kirovsky districts of Donetsk suffered injuries of varying degrees. Fifteen residential buildings and five infrastructure facilities were damaged in Donetsk, Staromykhailovka, and Horoivka.

During September 24 AFU fired more than 210 shells from the US-made HIMARS MLRS and tanks, 155mm and 152mm caliber artillery, as well as 120mm mortars, Colonel Eduard Basurin, an official spokesman for the DPR's national army, said at an evening briefing. The fire was directed at the areas of 10 settlements of the republic, as a result of which one civilian was killed and 7 were wounded. Thirty-one households and seven civilian infrastructure facilities were damaged, he clarified.

On September 25, 20 missiles have been fired on Kherson city. A hotel where newsmen were living located in the city has been destroyed. Two persons have been killed, including an ex-Ukrainian MP Aleksey Zhuravko.

Four apartment buildings and a mother and child center in Alchevsk (LPR) were damaged by AFU shelling.

Kiev regime continues to shell Zaporozhye nuclear power plant or ZNPP despite the specific provisions of the international law and two resolutions adopted by the Council of Governors of the IAEA in March and September 2022 that prohibited to use military strikes against such facilities.

Russian air defence facilities have shot down 1 Bayraktar-TB2 unmanned kamikadze aerial vehicle over Kakhovka reservoir on its way from Nikopol towards ZNPP used intentionally to deny water supply to the nuclear plant as a cooling substance. The IAEA DG Rafael Grossi and the UN Secretary General Antonio Guterres displayed no interest in denouncing such dangerous activity conducted by AFU day in, day out from March 2022 bringing to a technological disaster.

AFU artillery has shelled Volna suburban settlement located near ZNPP. A total of 10 projectiles have been launched from the area of Marganets (Dnepropetrovsk Region), controlled by AFU. Enemy firepower has been neutralised by Russian artillery.

3. Situation on the battlefield

Massive fire attack has resulted in causing casualties of over 140 servicemen and 19 units of military equipment pf 14th and 92nd mechanised brigades near Kupyansk (Kharkov region), as well as of 66th Mechanised Brigade near Shchurovo (Donetsk People's Republic). High-precision attacks launched by Russian Aerospace Forces at the positions of 28th Mechanised and 59th Mechanised Infantry Brigades near Nikolayev, as well as of 61st Chaser Infantry Brigade near Ternovka (Nikolayev region) have resulted in the elimination of over 200 nationalists, 3 tanks and 16 armoured combat vehicles. Missile attack launched at a provisional base of foreign mercenaries near Kalinovka (Nikolayev region) has resulted in the elimination of up to 300 militants.

Russian air defence facilities have shot down 7 unmanned aerial vehicles near Staromlynovka, Valeryanovka, Kirillovka (DPR), Reshetilovskoye and Lyubimovka (Zaporozhye Region), Chkalovo and Kirovo (Kherson Region). 42 projectiles launched by HIMARS and Olkha MLRS, as well as HARM anti-radar missiles have been destroyed in the air near Novaya Kakhovka, and two Tochka-U tactical missiles have been intercepted over Matrosovka and Korsunka (Kherson Region).

“What is Britain’s interest in Ukraine? Why are we shovelling weapons and equipment into that country, despite the fact that our national budget is stretched to bursting and our own armed forces have for many years been starved of money, men and kit?  If we were a proper open society, surely this question would be asked all the time. But it is not. So, I am asking it now, as the Ukraine war threatens to ignite the whole of Europe and has already brought us closer to actual nuclear warfare than we have ever been”.