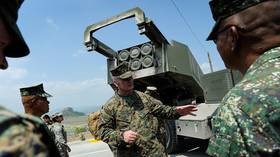 1. The Russian Embassy in the USA says the delivery of four more HIMARS units is intended to prolong the conflict

The diplomatic mission's statement went on to suggest that the planned delivery of additional MLRS of such type is intended to make up for growing casualties among Ukrainian forces. It dismissed the Pentagon’s claim that such weapons are being used by Kiev for defensive purposes.

The Ukrainian military and “nationalist groups are deploying US-supplied weapons to destroy cities of Donbass,” the statement added.

The Russian diplomats claimed that the “Ukrainian Armed Forces are constantly deliberately targeting residential areas of Donetsk,” including parts of the city where there are no Russian troops. As a result of this, “civilians are dying,” according to the embassy.

“The goal of the Russian Federation is to put an end to the terror of the Kiev regime,” the embassy proclaimed, adding that “Washington with its actions is not bringing peace closer, but on the contrary, is encouraging the Ukrainian authorities to commit new blood crimes.”

When asked by a journalist about the total number of HIMARS units that Ukraine would have after receiving the new four ones, the Pentagon representative said Kiev would have 12 such systems at its disposal.

The Russian MoD warned July 10, that it will destroy any HIMARS unit

if they appear in Ukraine

Russian military officials also said that the Russian troops struck at the point of temporary deployment of the artillery unit of the Armed Forces of Ukraine. As a result of the strike, up to 100 personnel and more than 1 thousand artillery shells for M777 howitzers made in the USA were destroyed. The Russian Air Force also struck two hangars in which artillery pieces of this type used in the shelling of Donetsk were stored.

Allied troops (Russian plus the DPR and the LPR troops) continue to conduct military operations to liberate Serebryanka, 10 km from Seversk in the DPR. This was stated by the Ambassador of the Luhansk People’s Republic to Russia, Rodion Miroshnik. According to him, retreating Ukrainian militants are trying to shell the already liberated territories, e.g. Novodruzhesk a suburb of Lisichansk, liberated July 3rd.

Western countries have underestimated Russia’s will to win in Ukraine. “American Thinker” journalists say that those who do not believe in the victory of Russia are simply trying to put on a good face in a bad game. Observers of the American edition noted that Western countries underestimated Russia’s will to win, since Moscow will never allow Ukraine to join NATO.

In a blog written by Jared Peterson on July 8, 2022 entitled “Russia's will to win in Ukraine”, its author partly noted the following:

“By Western countries could avoid the crisis in Ukraine, for this it was enough to maintain its neutral status, give autonomy to Donbass and recognize Crimea as Russian.
Western policy elites who claim not to have seen this war coming – after the Biden administration treated Ukraine as a de facto member of NATO during all of 2021, and after Russia had been saying for nearly a decade that it would not tolerate Ukraine as a U.S. military bulwark on its border – are just plain fools.  If they really were this blind, they were unqualified for their jobs.
Before the war started, as late as December of 2021, the Russians very probably would have settled the Ukraine problem by a declaration of permanent Ukrainian neutrality (i.e., no NATO membership, ever); some form of reasonable autonomy for the Russian-speaking, pro-Russian Donbas within Ukraine; and recognition of Crimea as Russian. This settlement in no way would have adversely affected legitimate U.S./Western interests.  …
The Russians will not be defeated, period, for the simple reason that, by orders of magnitude, Ukraine means more to them than it does to us.  They see a Ukraine within NATO, armed to the teeth with U.S. sophisticated weapons aimed at them, as an existential threat to mother Russia.  They won't let it happen.  They have said so for years.  If the war looks as though it's moving toward a Russian defeat, they will do what it takes to avert that.   We don't want that outcome.  That way lies catastrophe. …
Other things being roughly equal (as they are in this war), victory in war goes to the side with the greater commitment and willingness to suffer.  Russia has the greater will in this war.  And it knows how to suffer.  Therefore, it wins. …
It was a fool's errand for the U.S. to provoke this war, and for that matter a fool's errand from the start (1999), for the U.S. to expand NATO eastward in the total absence of any Russian threat after the collapse of the Soviet Union”.
[https://www.americanthinker.com/blog/2022/07/russias_will_to_win_in_ukraine.html]
My comment:
Russia will win because:
1. It seeks the noble goal – to protect Russians, Ukrainians and other nations in Donbass, Crimea and in some other areas of Ukraine who do not want to live in a neo-fascist state in Europe.
2. It has a noble goal – like it did in the WWII – once again to eliminate fascism in Europe created and nourished by a group of totalitarian and non-democratic states.
3. It will not accept the policy of global domination and diktat professed by a handful of NATO authoritarian leaders.
4. It desires to create a qualitatively new world order based on equality of all nations, free trade without illegal sanctions, and free from three major types of arms races: nuclear arms race, missile defense arms race, and space-based arms race.
Written by Vladimir P. Kozin
11.07.2022
Tweet