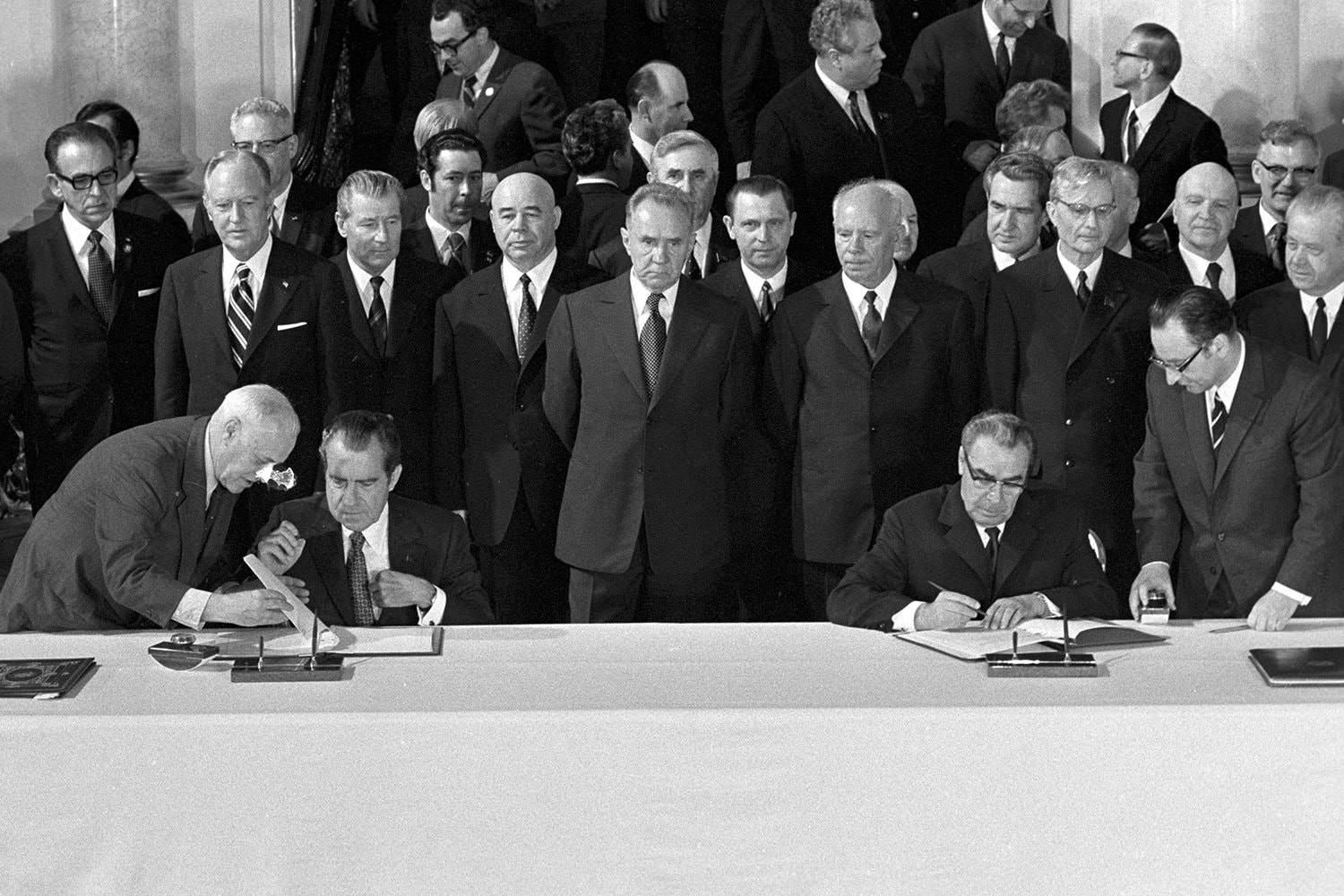 At the end of May 2022 it was 50 years since the signing of three treaties between Moscow and Washington that to a certain extent marked the beginning of the arms control system and helped to strengthen strategic stability in the world. These treaties are: May 26, 1972 ABM treaty and the Interim Agreement between the USA and the USSR on measures to limit strategic offensive arms, known as SALT I signed at the same date, and bilateral Agreement on prevention of incidents on and over high seas or in short known as INCSEA accord reached on May 25 the same year.

What is the main feature of these three treaties?

They all have one thing in common: they all relate to agreements reached in the field of international arms control mechanisms.

At the same time, each of them has a specific and distinctive purpose, as their name implies. For example, the ABM Treaty established the most acceptable balance between the strategic offensive and strategic defensive arms of the parties on the assumption that neither party could protect its territory with a limited number of interceptors of the ABM system. Such a measure, according to the initiators of this arrangement, would prevent the first attacker from defending against a massive nuclear missile retaliatory strike. The foundation of strategic stability between the Soviet Union and the United States was based on this notion at that time.

The SALT I agreement called for limiting the number of land- and sea-based ballistic missiles and launchers of both sides to the level they were at the time of its signing. The document forbade the construction of additional fixed launchers for ICBMs beginning July 1, 1972. The parties pledged to limit SLBM launchers and then modern submarines with SLBMs to their number in service and under construction as of the date of signing of the accord.

The Agreement on prevention of incidents on and over high seas prohibited dangerous rapprochement of naval and air vessels of the USSR and the USA while moving in the World Oceans or in the international airspace. Thus, it legally enshrined the then mutual interest of Moscow and Washington to ensure the safety of naval and air vessels in international waters beyond the outer limits of the parties' territorial waters or in the airspace above them.

All three accords have been very useful

They all have been clearly mutually beneficial.

For example, the ABM Treaty, which the Soviet and U.S. leaders at that time said was the cornerstone of strategic stability, limited the missile defense arms race. At first, this treaty limited the number of interceptor missiles for each side to 200, deployed in two permitted areas of the "missile defense shield." But later, under a Protocol to it signed in 1974, Moscow and Washington reduced the number of such areas to one, with no more than 100 interceptor missiles for each party.

The SALT I and subsequent SALT II agreements put a halt to the nuclear arms race and became the basis for a whole new category of treaties, such as START I (1991), START II (1993), the Strategic Offensive Reduction Treaty (SORT) (2002), and START III (2010). All of them resulted in a gradual reduction of the number of the parties' strategic nuclear missiles, and later in a reduction of their qualitative characteristics, for example, by prohibiting for a certain period of time the installation of MIRVs on one ICBM, reducing their number of mounted warheads (MIRV) to one. In other words, they turned them into a single warhead missile.

In particular, the START-III Treaty, the validity of which has been extended until 2026, provides for keeping in the strategic nuclear missile balance of each party 1,550 strategic nuclear warheads and 800 deployed and non-deployed ICBMs and SLBMs, as well as their heavy strategic bombers.

Finally, the U.S.-Soviet Agreement on prevention of incidents on and over high seas  has led to a reduction in the number of dangerous approaches of the parties' warships and support vessels on the World Oceans and high seas, as well as their combat aircraft in the airspace above them. It also served as the basis for similar agreements of the Soviet Union, and later Russia, reached with the world's leading naval and air power states, both NATO members (e.g., the UK, Italy, France, Germany and some others) and non-members of the transatlantic Alliance (e.g., Japan and South Korea).

On the basis of such agreements, periodic review meetings of the delegations of the member states were initiated and began to be held in order to analyze the progress of their implementation and to resolve any practical issues that sometimes arose.

Unfortunately, the INCSEA agreement does not apply to the submarines of the two sides that are submerged. Due to the fault of the American side, which sent its nuclear-powered SSBNs and SSNs to the combat training zones of the Northern Fleet of the USSR and later Russian Navy, there were several cases of their collision with Soviet/Russian submarines under water. The U.S. side has repeatedly rejected the Russian initiative to extend the provisions of such an agreement to submarines of the two sides in the submerged positions of the parties to the arrangement.

It is known that two of the three named treaties have ceased to exist: the ABM Treaty was unilaterally and initially denounced by the American side in 2002, and the SALT I agreement ceased to exist when it expired and was replaced by the subsequent SALT II accord.

Is the future in arms control bright or not?

Pentagon apparently will not give up further development of American global "antimissile shield" both in quantitative aspect, that is by means of increasing the total stock of interceptor missiles, mainly sea-based, and in qualitative aspect – due to improvement of their guidance accuracy, increase of flight speed and fitting them with individual guided reentry vehicles.

On the other hand, Russia now has effective means to overcome the global U.S. missile defense system from practically any direction. These capabilities will level out the U.S. ballistic and cruise missile interception infrastructure, despite the enormous sums of money that the USA has allocated to creating an multi-layered ground, sea and space-based missile defense system.

In the current situation Russia has to be very cautious about addressing the multifaceted problem of arms control, given that Washington is ready, as it has demonstrated more than once, at any time to withdraw from any agreement that it does not like for whatever reason.

Unfortunately, today, when the U.S. ruling circles have set their sights on the destruction of Russia, and statements about the admissibility of nuclear war are appearing in Washington, there is no point in even talking about any new agreement in the arms control system. Although it is quite obvious that the world has found itself, figuratively speaking, with a missile at its head’s temple  due to the fault of the West. Many countries have begun developing the latest types of weapons, including those in the "conventional" category, which are capable of delivering warheads to targets at hypersonic speeds while traveling at low altitudes, making them difficult to detect. In essence, the militarization of space has begun. The threat of the creation and proliferation of biological weapons is growing.

In short, the situation is developing according to an extremely dangerous scenario, fraught with the most unpredictable consequences for mankind. Earlier this year, the authorities in Kiev, who started talking about nuclear weapons, their accession to NATO, and their readiness to regain Crimea by military means, added fuel to the fire. The Ukrainian conflict needs to be resolved, based on the complete denazification and demilitarization of this country. And to do this, the West should stop all military assistance to the Kiev regime and force it to sit down at the negotiating table. NATO countries should constructively consider last December's proposals from Moscow on mutual security guarantees.

Only then Moscow will be able to talk about restoring trust and normalizing the situation, which will allow us to begin the process of negotiating further arms control, a crucial factor in strengthening international security and strategic stability.

Any practical success along this bumpy road, without exaggeration, will bring the well-being and survival of the entire humanity. For the benefits of all.

Joint Coordination Headquarters for Humanitarian Response of the Russian Federation continues to record the blatant facts of criminal actions by military personnel of the Ukrainian armed forces and militants of Ukrainian nationalist formations against civilians of Ukraine and the People's Republics of Donbass:

These facts once again demonstrate the Ukrainian authorities' complete disregard for the norms of morality and the provisions of international humanitarian law. All this is happening with the tacit consent of the "Russophobe-influenced" countries of the so-called collective West, which continue to turn a blind eye to the numerous war crimes of the Kiev regime.

In addition, according to information received from captured Ukrainian servicemen, militants of Ukrainian nationalist battalions are preparing another provocation with the use of toxic substances in the city of Sumy.

The neo-Nazis plan to shell Russian border territory from a residential area in the city and provoke Russian units to retaliate, after which they will blow up chemical tanks.

Foreign journalists are in Sumy to take photographs and video.

This cynical action will soon be used by the Kiev authorities to accuse the Russian Armed Forces of allegedly using chemical weapons and indiscriminate strikes on civilians.

Moreover, while previously in preparation for such provocations the civilian population was withdrawn from the area of planned contamination, now, in order to maximise the resonance, no warning was given to the population.