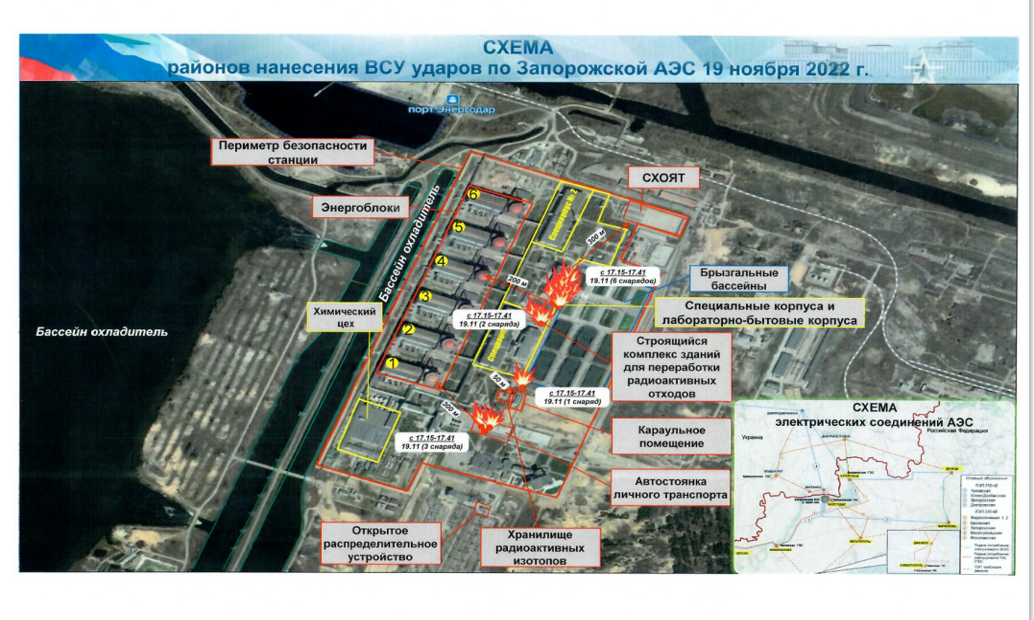 1.  By shelling ZNPP Kiev intends to blackmail the world community

Kiev still issues orders to actively shelling Zaporozhye NPP (ZNPP) despite great concern over such barbaric and inhumane acts expressed by many international experts and the world community at large. Such acts are also considered as a gross violation of the international law and specific regulations related to peaceful nuclear facilities generating heat and electricity.

During last week Armed Forces of Ukraine or AFU have attacked ZNPP with a great number high-caliber missiles and artillery ammunition.

On November 19-21, ZNPP, Europe’s largest nuclear power plant, came under the most intense shelling ever by the Ukrainian Armed Forces.

They are the most serious incidents at the facility in recent months, the IAEA Director General Rafael Grossi admitted. But he once again failed to urge Ukraine to stop such wild shelling of ZNPP.

The four IAEA nuclear safety, security and safeguards experts currently staying at the site have observed damage to condensate storage tanks that caused non-radioactive leaking, several impacts on the main road along the plant’s reactors as well as on a site railway that is out of service, a pressurized air pipeline hit by shrapnel, two impacts on the roof of a special auxiliary building where fresh nuclear fuel is stored, radioactive isotopes storage site, visible damage to a sprinkler charging pipeline, as well as two impacts in a guardhouse area [see please photo of the Ukrainian attacks attached separately].

The IAEA team also reported that there had been shelling in the area of the nearby city of Energodar where ZNPP is located, and the industrial area nearby.

Russian “Rosatom” employees also staying at ZNPP counted more than 20 hits from large-caliber guns on the territory fired by AFU from Marganets city controlled by Kiev.

In his statement released on November 24 Rafael Grossi said that external power has been restored to ZNPP a day after it lost access to off-site electricity in the latest incident highlighting continued threats to nuclear safety and security.

The IAEA announced earlier this month that it would soon send its inspection missions to Chornobyl NPP as well as to the Rovny, South Ukraine and Khmelnytsky NPPs, at Ukraine’s request.  All of them are controlled by AFU.

Guess, please, what will be the results of these trips.

2. Russia has no plans for high-level contacts with the USA

Russia’s Deputy Foreign Minister Sergey Ryabkov told a news conference on the eve of the Ninth Review Conference of the parties to the Convention on the Prohibition of Biological and Toxin Weapons (BTWC) on November 24 in Moscow that Russia has no plans to arrange a high-level talk with the USA: "As for the specific topic of certain contacts, I want to emphasize that we did not initiate anything like that either in terms of probing into this possibility or in an official way. There were no plans for such contacts," he outlined.

Ryabkov explained that the parties were conducting a dialogue only through the usual diplomatic channels, without involving the presidential level. He recalled it was the United States that unilaterally and without any motives "curtailed work in many areas" in an attempt to demonstrate something to Russia.

"There was no need for demonstrating anything to us. We understand the US attitude and the essence of the policy that the United States is pursuing towards Russia. But as long as they made such a choice, it is up to them to revise it. If and when they realize this, then, probably, it will be possible to talk about some contacts and additional opportunities for a dialogue. If not, then there will be no such contacts. I don't see any problem here at all," Ryabkov concluded.