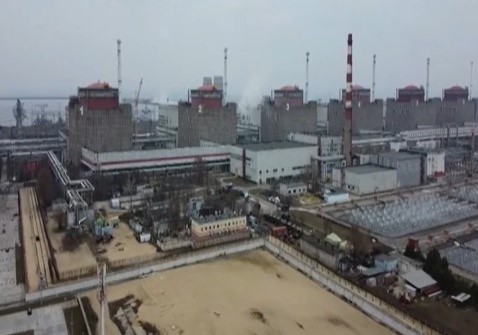 The Kiev regime continued its provocations aimed at creating a possible technological disaster at Zaporozhye Nuclear Power Plant (ZNPP). It did so on November 19 and 20, 2022.

Exactly, on 19 November, AFU artillery launched 11 large-calibre shells at the nuclear power plant. In the morning of 20 November, Ukrainian forces launched two strikes at the facility.

From 9.15 am to 9.45AM at that date 12 large-calibre shells had been launched. Eight of them exploded between the fifth power generator and the special building №2, three of them impacted the area between the fourth and the fifth power generators, and one of them impacted the roof of the special building № 2 packed with a fresh nuclear fuel. From 10.00 am to 10.10AM, two other shells, launched at the electric power transmission line that aliments the plant, had been recorded.

The Russian MoD said totally twenty-five shells were fired at the plant during these two days.

The strikes were launched from the AFU-controlled area of the city of Marganetz (Dnepropetrovsk Region). The hostile firepower has been neutralised by Russian artillery's counter-attack.

The consequences of the damage caused by the artillery attacks launched by the AFU have been clarified after inspecting the plant’s territory by experts from Rosatom and the International Atomic Energy Agency or IAEA.

The IAEA team that is monitoring the situation on the ground, said that “more than a dozen blasts were heard within a short period of time” on Sunday, November 20. It added that experts could see some of the explosions from their windows.

On November 21, 2022 Russian MFA made a statement concerning ZNPP shelling by AFU

It said that the Kiev regime continues playing with fire by staging crude, irresponsible provocations at the Zaporozhye Nuclear Power Plant. After a temporary cessation, Ukraine’s Armed Forces resumed artillery shelling of its territory inside the perimeter. The plant’s critical infrastructure and the lives and health of its workers have again come under threat.

On the evening of November 19, the plant’s territory was shelled by numerous artillery strikes with NATO 155 calibre munitions. The shelling continued on the following day, November 20 and hit, among other things, a nuclear waste storage facility. Luckily, the plant avoided serious damage, and no radioactive material was exposed. But the situation was on the brink of a technogenic disaster.

From the very start of the attacks at the plant, we have maintained close contact with the IAEA Secretariat. As before, we sent all information about this latest attack, including photos and videos of the consequences of the shelling. We asked the Secretariat to inform the IAEA members about this immediately. The international community should know who stands behind the attacks. This is all the more important because Kiev propagandists are again making absurd claims that Russia is shelling its own position.

Kiev’s actions look particularly cynical because they followed almost immediately a regular session of the IAEA Board of Governors in Vienna that reviewed the situation on nuclear facilities in Ukraine. Finland and Canada timed the submission of another anti-Russia draft resolution at this session. This document makes no mention of the real source of these threats, Ukraine, that has been furiously and purposefully destroying the infrastructure of Europe’s largest nuclear power plant for some time.

In this way, Kiev’s Western sponsors have again showed their duplicity, Russian diplomatic service noted, by adding that:

They gave the Zelensky regime carte blanche to continue its senseless attempts to irreparably damage the plant. In fact, they are accomplices in Kiev-committed crimes that cannot be justified.

It seems that, inspired by the limitless support of their Western curators, the Ukrainian authorities have no restraints at all. They do not even care about subjecting the lives of the IAEA representatives to a lethal threat. We are convinced that in such unprecedented circumstances, the top directors of the IAEA Secretariat must take a responsible position. As an authoritative and independent international body, it should stop denouncing the shelling of the plant and stop demanding it be stopped without naming the responsible party. It should clearly say who is to blame for these attacks.

It is time to call a spade a spade – otherwise it is impossible to stop these Ukrainian nationalists. This requires determination and responsibility. We hope these qualities will be displayed, the Russian MFA concluded.