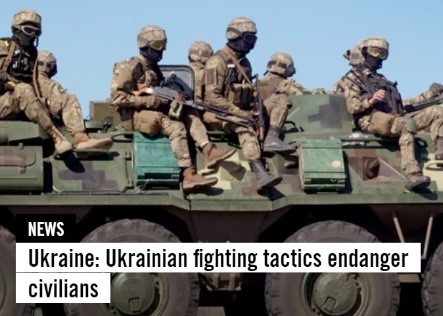 On August 4, the international human rights organization Amnesty International published a report on Ukraine's violation of the laws of warfare and international humanitarian law, in which it said that the Ukrainian military is deploying military equipment and weapons in schools, hospitals and residential areas, turning them into military strongholds. Secretary General of the organization Agnes Callamard emphasized: "We have documented that the Armed Forces of Ukraine put civilians in a risky position and violated the laws of war during actions in crowded places."

The report also noted the absence of any actions by Kiev to organize the evacuation of civilians from the areas where combat operations are underway. The conclusions set out in the document are based on data obtained during visits by human rights defenders to settlements in the south-east of Ukraine, namely Kharkiv Region and Odessa.

Amnesty International has a lot of weight in the international arena and has proven itself by publishing impartial and reliable reports, the content of which is taken into account even by the governments of European states. For drawing attention to human rights violations and activities aimed at no compliance with international standards, the organization was awarded the Nobel Peace Prize, as well as the UN Prize in the field of human rights.

On July 29, Amnesty International leaders sent a letter to the Government of Ukraine listing numerous Ukrainian cities and villages where described violations were documented and provided GPS coordinates of 24 places, including schools and hospitals, where Ukrainian soldiers were stationed. Amnesty International waited for the answer by August 3rd, 2022. But there was no response from Kiev at all. On the contrary, on the day of the publication of the report, almost all Ukrainian officials hastened to make unfounded denials. The voiced statements, filled only with slogans about the inadmissibility of criticizing the "victim" and the need to concentrate efforts on the accusations of the "aggressor", completely lacked any facts.

The Minister of Foreign Affairs of Ukraine Kuleba on his Facebook page saw in "such behavior" a kind of "false equivalence". Advisor to the Office of the President of Ukraine Podolyak on Twitter branded Amnesty International disgrace for "participating in the Russian disinformation and propaganda campaign." The Minister of Defense of Ukraine Alexey Reznikov in an interview with a journalist of the American media organization "Politico" accused the drafters of the report, in his opinion, aimed at undermining his personal authority in the "loss of adequacy". President of Ukraine Zelensky also found no weighty arguments and regarded the report as an attempt to "shift responsibility from the aggressor to the victim."

The head of Amnesty International in Ukraine Oksana Pokalchuk, who was forced to leave her post on August 5, said on social networks that the data used was obtained not from the branch she heads, but from international researchers. A Facebook post written to her confirmed that the arguments of the Ukrainian office, "which was not involved in the preparation or writing of the publication text," were not based on an analysis of the reliability of the data used, but were reduced only to "the inadmissibility of such material."

In turn, American human rights activist Ajamu Baraka said that Amnesty International had exposed "the lies of President of Ukraine V. Zelensky, who suppressed the obvious facts of war crimes of Ukrainian troops." In addition, readers of the British edition of the Daily Mail were shocked by the data provided in the report. In the comments they left, they noted that the Ukrainian authorities purposefully lead their people to slaughter and accused V. Zelensky of destroying the country under the guise of allegedly helping citizens of Ukraine. Visitors to the website of the French newspaper Le Figaro also accused the head of Ukraine of a lack of desire to resolve the crisis and noted the validity of the statements of the authors of the report.

During a Special Military Operation, the Russian Defense Ministry has repeatedly accused the Armed Forces of Ukraine for using residential and social facilities to house troops and equipment.

For example, on August 4, the Russian MoD reported that the Ukrainian military used a school in Novaya Vodolaga, Kharkov Region, a technical school in Slavyansk, Donetsk People's Republic, a children's music school in Varvarovka, Nikolaev Region [see please Report # 117 dated August 6]. Official representatives of the Ministry of Foreign Affairs of the Russian Federation also cited numerous proofs of the use of "human shield" tactics by Ukrainian Armed Forces.

In many Reports issued so far, such facts have been cataloged to a great extent.

Despite the abundance of facts and collected evidence, the Kiev regime,

which is in the current illusion of impunity, obviously does not intend

to recognize its war crimes already recorded at the international level many times.

2. Kiev intended to create the next Chernobyl disaster

In addition to Report # 117 released on August 6, 2022 there is a need to add it with some more information.

On August 5, one of the units of the 45th Artillery Brigade of the Armed Forces of Ukraine carried out three artillery strikes on the territory of the Zaporozhye Nuclear Power Plant and the city of Energodar situated not far away from it. The strikes were carried out from firing positions near the village of Marganets, located on the Ukrainian army-controlled shore of the Kakhovsky Water Reservoir.

Zaporozhye NPP is the largest nuclear power facility in Europe

As a result of the shelling, a flare-up of hydrogen occurred at the corresponding substation of the NPP, part of the equipment of Power Unit No. 3 was de-energized, the generated capacity of Power Unit No. 4 was reduced, electricity and water supply to the districts of the city of Energodar has been partially cut off. The fire at the station was promptly eliminated by emergency services. In the immediate vicinity of the places of fall of the Ukrainian shells there is an oil-fuel economy and an oxygen substation, in case of falling into which a powerful explosion and a large fire should be expected.

I. Vishnevetsky, Deputy Director of the Department for Nonproliferation and Arms Control of the Russian Foreign Ministry, commenting on the criminal incident of the Armed Forces of Ukraine, announced the intention of the Russian Federation to resume the activities of the IAEA to inspect the Zaporozhye NPP. However, the UN Secretariat, following the line of Ukrainian propagandists carried out in the Western media, at the very last moment cancelled a carefully worked-out trip.

Earlier, at the World Economic Forum in Davos, the Director General of the IAEA, Mariano Grossi, informed the world community about the blocking by the Ukrainian side of the permission for the admission of representatives of the organization headed by him to the NPP. On the contrary, the Russian Federation, after establishing control over Energodar, has repeatedly reported its readiness to receive an international inspection.

It is no coincidence that this cynical provocation was carried out by the Kiev regime simultaneously with the holding in New York, under the auspices of the United Nations, of an international Review Conference on the Treaty on the Non-Proliferation of Nuclear Weapons.

Earlier, the territory of the Zaporozhye NPP had already become the target of the APU, which struck using unmanned aerial vehicles. The deployment of electronic warfare systems of the Russian Armed Forces at the facility made it impossible to use UAVs, which prompted the Ukrainian military to use less accurate, but more destructive artillery. Zelensky's team is once again trying to present the strikes allegedly carried out by the actions of the Russian army, which controls the nuclear power facility.

Such provocations at potentially dangerous facilities arranged by the Armed Forces of Ukraine have been carried out regularly by order from Kiev.

Such provocations have been implemented both at NPP and at other industrial enterprises.

E.g. on March 9, 2022 Ukrainian artillery damaged the power supply system of the Chernobyl NPP, which led to its complete de-energization. On April 5, Ukrainian units retreating from Rubezhny blew up a tank with hydrochloric acid on the territory of the “Zarya” industrial enterprise. On May 31, Ukrainian nationalist formations, leaving the territory of the “Azov” plant in Severodonetsk, ignoring the danger of hitting the local population, detonated a tank with nitric acid.

The Kiev regime, anticipating huge financial injections from the United States and Europe, despite the deadly danger both for its own population and for European states, continues to commit high-profile crimes and accuse the Russian side of them. Zelensky's team is carrying out acts of nuclear terrorism, which require immediate condemnation by international organizations and the adoption of productive measures to prevent further criminal actions that could lead to a catastrophe on a pan-European scale.

Only unprofessional “experts” in the West not familiar with the global history of attacking NPP and factories producing various dangerous chemical substances can claim that Russia allegedly attacked them.

But such “experts” do not know that there are no such facts recorded so far due to their non-professionalism and ignorance.

On the other hand, the current failed and ultra nationalist Kiev regime has made several attempts to destroy such facilities and create very dangerous situation in Ukraine and in Europe with the help of blackmail.

Unfortunately, masters of Zelensky always turn a blind eye to such suicidal acts engineered and implemented by Kiev rulers.