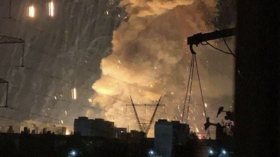 1. Novaya Kakhovka has been heavily shelled by AFU who used U.S. HIMARS

Novaya Kakhovka located in Kherson Region has been heavily shelled by Ukrainian war criminals in the evening July 11th. A local official said that during this terrorist attack five people were killed and at least 90 injured. Some people are said to have been buried under the rubbles.

A kindergarten, hospital, church and a market place were also damaged. a fertilizer storage depot detonated due to the shelling.

The city is controlled by Russian forces.

My comment: any direct or unintentional attack at this active NPP can cause severe tragedy not only to Ukraine and Russia, but may also affect many European nations.

It has been reliably established that Ukrainian nationalists are preparing yet another cynical provocation with civilian deaths in Slavyansk in Donetsk People's Republic to accuse the Russian Armed Forces of carrying out indiscriminate strikes against civilian targets. For this purpose, residents of nearby residential quarters are being held in the building of the Vocational Agrarian Lyceum (Nauka Street) under the pretext of allegedly ensuring security. At the same time, the building is mined and the militants plan to blow it up when Russian troops launch artillery strikes on military targets in the city.

Russia warned that the provocation about "Russian atrocities" is to be widely disseminated by the Kiev regime in the Ukrainian and Western media.

In addition, Ukrainian Armed Forces, as usual, continue to use educational institutions and social facilities for military purposes:

a) in Kharkov, AFU units and Polish mercenaries are based in the premises of the National Technical University (Poltavskyi Shlyah Street), artillery and MLRS are deployed, and there has been no deliberate evacuation of residents from nearby houses;

b) in Nikolaev, AFU units and territorial defence are deployed in kindergarten No. 126 (Mira Avenue) and school No. 11 (Kitoboyev Street);

c) in Pevnichnoye in Donetsk People's Republic, a stronghold with barracks has been equipped in kindergarten No. 10 (Novaya Street) to house fighters of Ukrainian armed formations and foreign mercenaries; the approaches to the building are mined, but the local population is deliberately not informed of this;

d) in Shirokolanovka, Nikolaev Region, nationalists placed heavy weapons and armoured vehicles on the territory of the vocational school (Tsentralnaya Street) and placed sniper positions and MANPADs on the roofs.

Such actions by Kiev once again demonstrate an inhuman attitude towards the fate of the Ukrainian citizens and show a complete disregard for all norms of morality and international humanitarian law.

Russia emphasized once again that in carrying out the tasks of the special military operation, the Armed Forces of the Russian Federation treat the local population extremely humanely and do not strike at civilian infrastructure facilities, unlike the Ukrainian armed formations.

In total, since the beginning of the special military operation, 2,481,664 people have already been evacuated to Russia according to their will and desire, of which 390,578 are children.

More than 9,500 temporary accommodation centres continue to operate in the regions of the Russian Federation. The refugees are dealt with on an individual basis and are promptly assisted with various pressing issues relating to onward accommodation, employment assistance, places for children in kindergartens and educational institutions, and the provision of entitlements to social benefits.

So far, more than 45,000 tons of basic necessities, food and medicines have been prepared at the collection points. Since March 2, 2022, 42,450.9 tons of humanitarian cargo have already been delivered to Ukraine, 1,292 humanitarian actions have been carried out, including 3 actions in Zaporozhye region, as well as in Donetsk People's Republic, during which 215.2 tons of basic necessities, medicines and food were transferred to the civilian population of the liberated areas.

On July 11, 5 humanitarian actions have been planned and are currently being carried out in Kharkov region, in Donetsk People's Republics, during which 272 tons of basic necessities, medicine and food will be distributed.

4. Situation in the Back Sea

There are no significant developments in this section. Situation remains the same. Kiev does not want to deactivate and remove sea mines from sea zones it has placed to block shipping of goods in both directions from Odessa and other sea ports controlled by Kiev – to Ukraine and from Ukraine, including Ukrainian grain abroad.

5. Developments on the battlefield

As part of counter-battery fighting, 2 platoons of Grad multiple-launch rocket systems and 2 artillery platoons of Hyacinth-B howitzers have been destroyed at firing positions near Dzerzhinsk, Donetsk People's Republic.

In addition, 12 rockets of Uragan multiple-launch rocket system have been intercepted near Lisichansk in Lugansk People's Republic, Brazhkovka in Kharkov Region and Novaya Kakhovka in Kherson Region.

6. The fate of foreign "wild geese" in Ukraine

Russian Defence Ministry monitors and records by name all foreign mercenaries who have arrived in Ukraine to take part in combat operations.

As it has already mentioned, contrary to the false claims of the Kiev regime about allegedly 20,000 of foreign mercenaries arriving to Ukraine, their actual number is much lower. Moreover, it is steadily declining.

Over the past three weeks, the number of mercenaries in Ukraine has decreased from 3,221 to 2,741 as a result of the offensive actions of the units of the Russian Armed Forces and people's militia of Lugansk and Donetsk Republics.

During this time, despite the arrival of another 151 mercenaries, 391 militants have been killed. Another 240 "wild geese" rushed to flee outside Ukraine.

Among the Georgian representatives, 50 "soldiers of fortune" were killed, the UK lost another 23 mercenaries in Ukraine. Also, 21 Romanian and 15 Canadian fighters were killed in three weeks.

Updated data on the count of foreign mercenaries currently in Ukraine has been published on the Russian Defence Ministry's information resources on the Internet.

Once again, the Russian Armed Forces are identifying foreign mercenaries even as they prepare to enter Ukraine.

Russian MoD reminded that under International Humanitarian Law, all foreign mercenaries are non-combatants and are not considered as POW. The best option that awaits them if captured alive is a trial and maximum terms of imprisonment.

The DPR has lifted off a moratorium on death penalties. Its Criminal Code is tougher that that of Russian Criminal Code.

7. Some other views in the USA

According to the U.S. correspondent Mike Glenn (The Washington Times, Sunday, July 10, 2022), while Ukraine gets more than $ 8 billion of U.S. war supplies since the start of the Biden administration, analysts ask how long it can go on.

The amount of military hardware sent to Ukraine pales in comparison to the $2 trillion that was spent in Afghanistan propping up a government in Kabul that collapsed in days once the U.S. military support dried up.

My comment: 20 Soviet-era Mi-17 helicopters has been stolen by the USA from Afghanistan in violation of the relevant Afghan-Russian contract that prohibited to use these choppers by other states.

Mike Glenn quoted a number of the U.S. citizens who put some unpleasant questions to the current U.S. Administration.

“A military analyst with Defense Priorities think tank said merely shipping billions of dollars of equipment to a war zone is not a strategy. “How does that tie into what the Ukraine military’s plans are? What is the end result of this? What are the expected consequences of this?” said retired Army Lt. Col. Daniel L. Davis, a senior fellow with the libertarian-leaning think tank. “I can tell you that there are no answers to this. When you look at the cumulative total of all of it, it’s not a fraction of what Ukraine needs.”

Senator Mike Lee, Utah Republican noted: “We must always make sure Congress maintains its constitutional role of directing engagement in conflict and ensure that we are not spending unnecessary funds while in a time of historic inflation and ballooning national debt,” Mr. Lee said in a statement.

Senator John Kennedy, Louisiana Republican, introduced a bill that would establish a special inspector general for Ukraine to oversee the humanitarian, economic, and security assistance funding provided by the U.S. government. “Congress has already supported [Ukraine] with billions and billions of dollars in aid and military equipment,” Mr. Kennedy said. “America’s taxpayers deserve to know that their money is helping Ukraine beat back Russia effectively, and Congress needs to guarantee that oversight.”

A retired Marine Col. Mark Cancian, a senior adviser with the Center for Strategic and International Studies, stated: “We’ve been sending a lot of equipment and we’re in the process of sending a lot of financial aid,” he said. “Ukraine is still a very inefficient, corrupt country. If people start seeing evidence of corruption - oligarchs buying yachts with American money - that would undermine support.”

My comment: the price tag of the U.S military aid to Ukraine cannot be compared with the much larger expenses the USA and the EU have already inflicted to themselves due to illegal economic sanctions and manipulations with natural energy resources